At the end of our street, beyond the washing lines.. 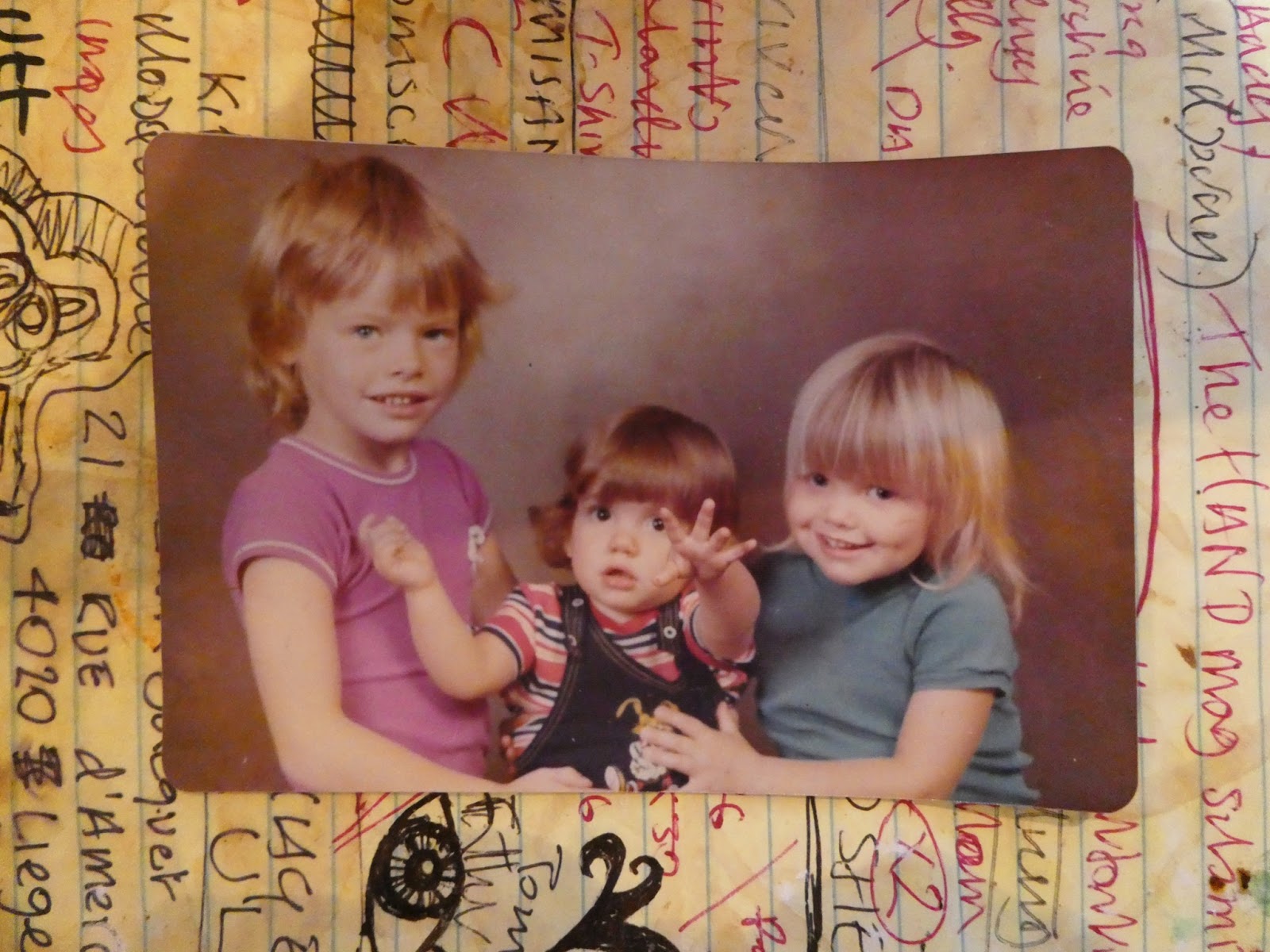 The 3rd poster on my childhood bedroom wall in 1976 was of Dennis Hopper and Peter Fonda from the movie Easy Rider. They were riding their Choppers, side-by-side through what looked like the same New Mexico landscape where I was standing that day in Taos in 2018. The poster was shot from a following car and it looked out at them across polished chrome like the cultural icons they already were. This poster was pinned up on my wall above the ‘Cocktail Party’ poster and the best view of it was when I was sitting on the floor. Easy Rider was a relatively new movie then, released 7 years earlier in 1969, the year I was born. In their boots, shades, hats, and with wild hair blowing back, my kid self had no idea who these motorcycle cowboys were and my imagination roamed for a connection to them and, in our home at that time, it did not take me long to find one.

Looking back now, I can say with certainty that I was, in fact, raised by the characters of Easy Rider but the cast was British. There was no high, bright desert sun over vast cactus-covered landscapes in my story. Instead my childhood was a dark, gritty, and in some ways a supernatural tale, set against the backdrop of social housing in a Garrison town. Our small civilian rock-n-roll hilltop pocket was where Easy Rider's counterculture could still be found alive and well but it ended abruptly at the entrance to the tree plantation at the end of our street, beyond the washing lines, where all the land from there on out was owned by the Ministry of Defense. Tanks, helicopters and squaddies in fatigues were the everyday and commonplace in Tidworth, Hampshire in 1976. As were the puddles of blood outside the pubs in the morning from fights the soldiers had amongst themselves the night before. The motorcycles of my boyhood were Triumphs, Norton’s, and BSA’s and I never saw a Chopper anywhere else but in that poster. Our free festival was at Stonehenge where we watched the summer solstice sun rise between the stones. Where I remember a sea of people cocooned in brightly coloured sleeping bags scattered across a huge muddy field on the morning I got lost. An open tent with dub reggae playing from speakers mounted on stands outside. A plate of beans on toast eaten from the lap of oil stained jeans. A silver death's head ring. When Hawkwind took me in. 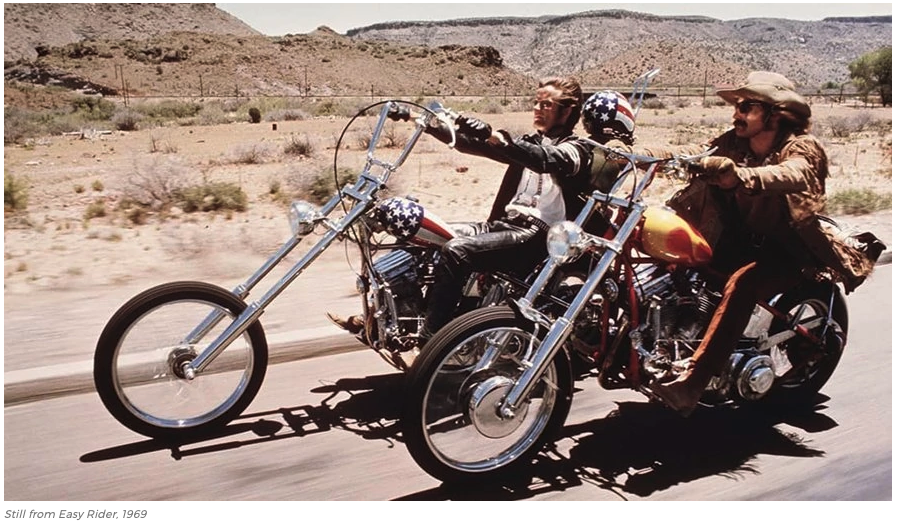 Dennis Hopper became the archetype of all the men that had a hand in raising me. It was his flickering image that slept on our couch for a year and smelled of Cocoa butter, engine oil and weed, with his book about Salvador Dali, he'd always let me read. It was him, in my memory, that took me to school in a motorcycle sidecar. It is his face that I remember playing Bob Dylan songs on a guitar from beginning to end at our kitchen table while howling like a dog. It was him that drove us to Wales in a Morris Minor van in search of magic mushrooms. It was him that introduced me to Marvel comics, the Mary Celeste and the curse of Tutankhamun. It was him that explained the closed loop timeline of the Planet of the Apes. And now I wonder, at this late hour, writing this today, if the face that my imagination was actually roaming to connect with was really that of my father, who died in March that year, and who probably has more to do with all of this than I am willing to admit.

These pictures were taken at the Jesus Nazareno Cemetery in Taos, New Mexico about a month after I arrived in Lenexa, Kansas at the end of April 2018. My friends Don and Gene Hudson picked me up on their way through, driving down from Michigan. They were on their annual trip to visit family and friends that they had out there and Lenexa, Kansas was going to be on their way. It was not unusual for us to rendezvous like this and over the years we have met up several times on the road, close to wherever both of our paths were going to be crossing and it was always good to see their friendly and familiar faces out there in the middle of nowhere. It had been about a year since I last saw them and I was looking forward to catching up. I was still shell shocked from my recent experiences in south Missouri and the idea of joining them on a road trip was a good one. That rolling mosaic of distraction and focus that only a long car journey with a camera can bring was going to be the perfect medicine for my restless spirit. I was far away from myself in every way I could think of, but knew I’d be safe in the company of those I considered to be family and the soundtrack was guaranteed to be fantastic..

Note: Facing the above photographs, if you now look over your right shoulder you’ll see the grave of Dennis Hopper and below is a picture I took of Don taking a photo of it. The photo he took is on the left. 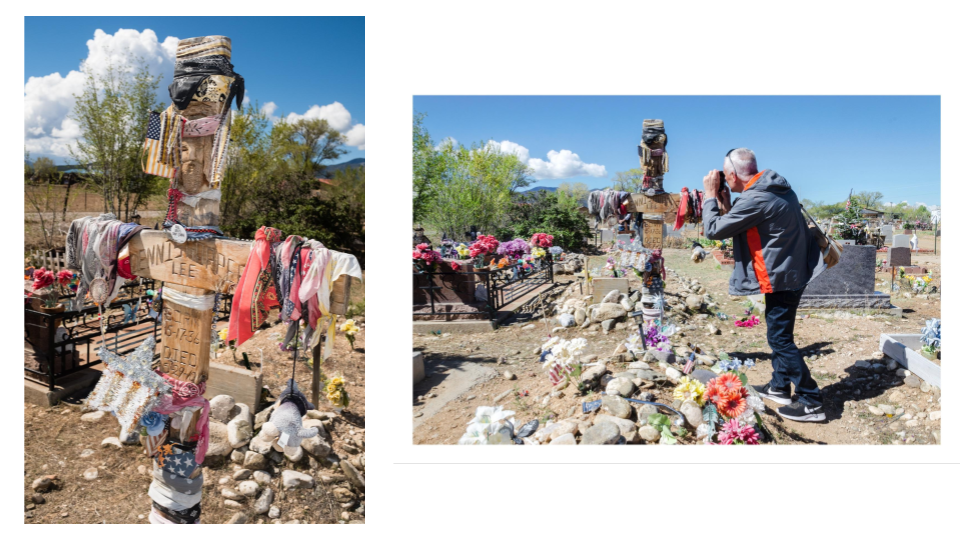 The 2nd poster that hung on my childhood bedroom wall was of the Apollo 11 Command Module floating in the Pacific ocean after returning to Earth from the Moon (below left). The 3 astronauts standing outside awaiting rescue in their jumpsuits and shoulder flags looking out at me in permanent out of focus bewilderment. (The Earthrise hung in our bathroom). This poster was pinned up high on the wall at the end of my bed and it was one of the first things I saw in the morning when I was waking up. Writing about this now has just sent me on a Google search looking for it, being curious to compare it to my recollections before I continue. In doing so I realize my memory of this image has been spliced with the memory of another image from that time. Namely the splashdown of the starship Icarus at the beginning of the 1968 movie Planet of the Apes, when the 3 surviving astronauts paddle for shore in an inflatable dinghy (below right). I suppose it does not take a giant leap of the imagination to connect these two and the movie does use imagery reminiscent of those earlier space missions. I was an avid fan of Planet of the Apes as a kid and it was hard to avoid with 5 movies followed by a TV show and an excellent comic book all released in as many years (and equal to my entire life then). With all this mixed in with NASA's ongoing real life space program, my imagination was on a fertile ground to launch me on my own fantastic internal voyages. It was a place where science fiction and science fact fused and I understand why my memory did the same thing by splicing them together this way. Both this movie and the moon landing occurred within a year of my birth and were imprinted upon my awakening consciousness as recent cultural events in what was then, a pre Star Wars universe. 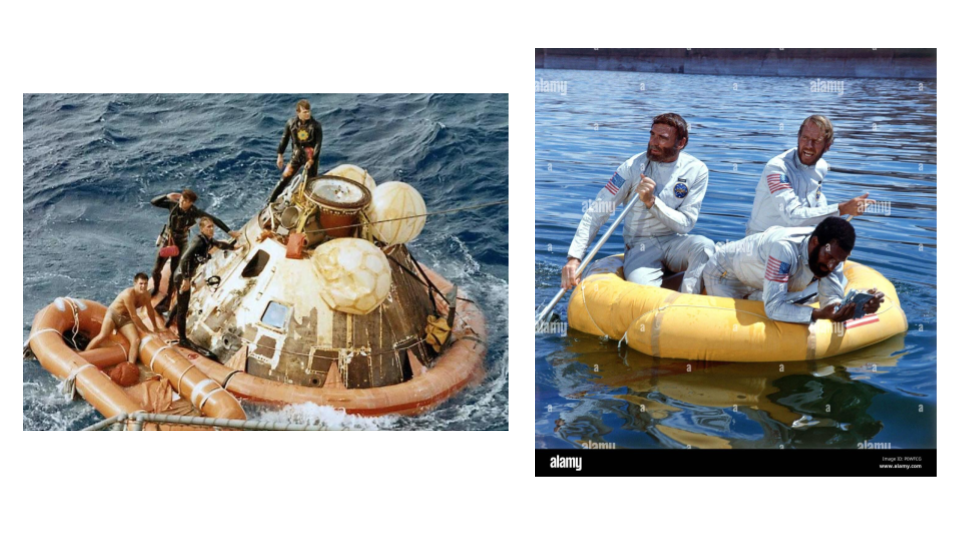 At the end of our street, beyond the washing lines.. The 3rd poster on my childhood bedroom wall in 1976 was of Dennis Hopper and Peter Fond...

About the photographs: These images are a search for a personal orientation between the dream or idea of a place and my actual experience of it in reality. They can be described as a collection of psychic coordinate points which I have plotted between the imagined America I brought with me from England and the real America I found on my arrival in 2008. These images are half truth and half fiction. They are a psychogeography, filled with personal symbolism and tangled with influences so old they were already part of me long before this journey ever began.
A note about the title: The compulsion to travel, to move from one place to another, has been with me my whole life. Whether it be local, national or international, I have always found myself either in motion or, if not, I have been dreaming about it. Paradoxically, it has been in the periods of dreaming that Agoraphobia, (which Google defines as “Extreme or irrational fear of entering open or crowded places, of leaving one's own home, or of being in places from which escape is difficult”) has gripped me and, at times, crippled me. These photographs are my continued (once secret) revolt against it in the United States of America today, despite recent quarantines.